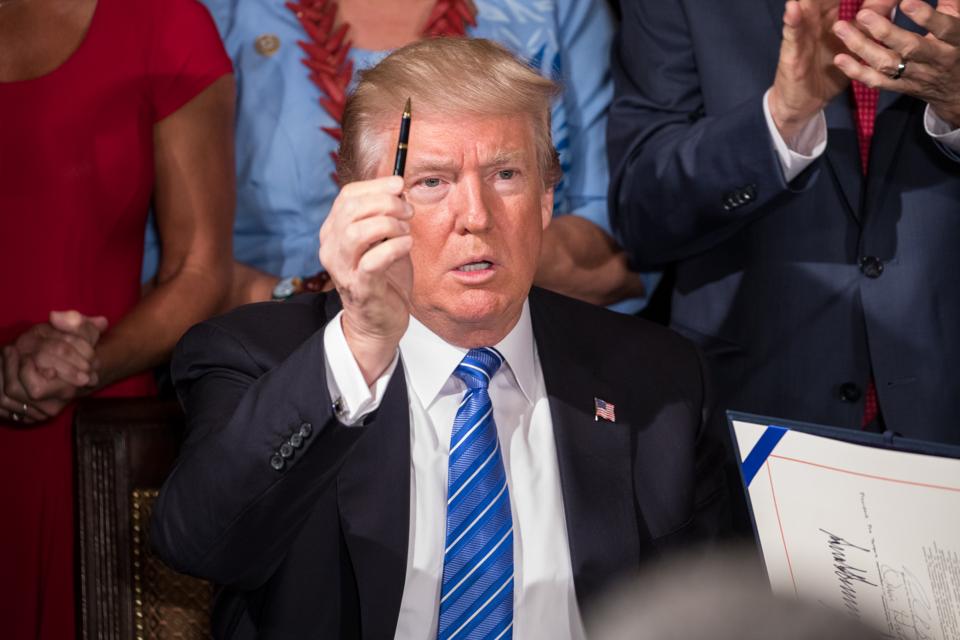 In a statement attached to a large-scale funding bill he signed into law on Friday, President Trump said in effect that he reserves the right to ignore a congressionally approved provision that seeks to protect state medical marijuana laws from federal interference.

“Division B, section 531 of the Act provides that the Department of Justice may not use any funds made available under this Act to prevent implementation of medical marijuana laws by various States and territories,” Trump wrote in a signing statement. “My Administration will treat this provision consistent with the President’s constitutional responsibility to faithfully execute the laws of the United States.”

Although the vague language doesn’t directly say he plans to ignore Congress’s will to block Justice Department prosecution of medical cannabis patients and providers, presidents typically use signing statements such as this one to flag provisions of laws they are enacting which they believe could impede on their executive authorities. By calling out the medical marijuana rider, Trump is making clear that his administration believes it can broadly enforce federal drug laws against people complying with state medical marijuana laws even though Congress told him not to.

But it doesn’t necessarily mean that a crackdown is on the way.

The administration hasn’t carried out any major enforcement activities against state-legal marijuana businesses since taking office, in accordance with Trump’s campaign pledges that he would respect the right of states to enact their own cannabis laws without federal interference. That also goes for recreational policies and businesses that aren’t even covered under the congressionally adopted rider, which has been part of federal law since 2014.

It is the third time Trump has said in a signing statement that his administration doesn’t necessarily have to abide by the medical marijuana provision. He included similar language when signing off on annual appropriations bills last year and in 2017, though he did not do so in 2018.

In August, the president reiterated his support for letting states legalize cannabis without federal interference.

Last year, when asked about separate pending congressional legislation that would more broadly exempt state-legal marijuana activity from the federal Controlled Substances Act, he said he “really” supports the bill.

Given the president’s consistently voiced support for respecting state cannabis laws, it’s not clear why he has gone out of his way to reserve his right to ignore the medical marijuana rider on a near-annual basis.

Among the handful of other provisions Trump singled out in his new signing statement are ones dealing with the closing the detention facility at Guantanamo Bay, restrictions on diplomatic activities and the dissemination of information that may be protected by executive privilege.

The Fiscal Year 2020 funding bill that Trump signed into law on Friday does not contain a broader rider seeking to shield all state marijuana laws—including those that allow recreational use and sales—that had been approved by the House of Representatives earlier this year. It, along with another provision that would have protected banks that serve state-legal cannabis businesses from federal punishment, was dropped from the final legislation in bicameral negotiations with the Senate.

Congressional leaders did include several cannabis-related provisions in a report attached to the legislation, though, such as language directing the Food and Drug Administration to formulate a policy of enforcement discretion for CBD products and requiring the National Institute on Drug Abuse to compile a report on the barriers that the Schedule I status of drugs including marijuana places in front of scientific research.