Opening the door for what could be a lucrative and controversial new industry on some Native American reservations, the Justice Department on Thursday will tell U.S. attorneys to not prevent tribes from growing or selling marijuana on the sovereign lands, even in states that ban the practice.

The new guidance, released in a memorandum, will be implemented on a case-by-case basis and tribes must still follow federal guidelines, said Timothy Purdon, the U.S. attorney for North Dakota and the chairman of the Attorney General’s Subcommittee on Native American Issues.

It once again sends a message that we really don’t care about federal drug laws. – Kevin A. Sabet, an opponent of marijuana legalization and former advisor on drug issues to President Obama

It remains to be seen how many reservations will take advantage of the policy. Many tribes are opposed to legalizing pot on their lands, and federal officials will continue to enforce the law in those areas, if requested.

Southern California is home to nearly 30 federal- and state-recognized Indian tribes, with a total population of nearly 200,000, according to state estimates. The largest tribes operate profitable casinos and outlet malls, including those by the Morongo, Cabazon, San Manuel and Pechanga tribes.

Representatives of several of the largest tribes could not be reached for comment.

The policy comes on the heels of the 2013 Justice Department decision to stop most federal marijuana prosecutions in states that have legalized the possession or sale of pot. Colorado, Washington, Oregon, Alaska and the District of Columbia have all moved to legalize the drug, though the D.C. law may be scaled back by Congress. 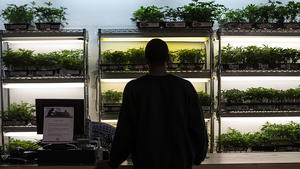 Some tribes see marijuana sales as a potential source of revenue, similar to cigarette sales and casino gambling, which have brought a financial boon to reservations across the country. Others, including the Yakama Reservation in Washington state, remain strongly opposed to the sale or use of marijuana on their lands.

Purdon said in an interview that the majority of Native American tribes, mindful of the painful legacy of alcohol abuse in their communities, appear to be against allowing marijuana use on their territory.

The federal government will continue to legally support those tribes that wish to ban marijuana, even in states that now permit its sale, Purdon said.

But the Justice Department will generally not attempt to enforce federal marijuana laws on federally recognized tribes that choose to allow it, as long as they meet eight federal guidelines, including that marijuana not be sold to minors and not be transported to areas that prohibit it.

“The tribes have the sovereign right to set the code on their reservations,” Purdon said.

John Walsh, the U.S. attorney for Colorado, said a primary purpose of the memorandum to be released Thursday is to assure U.S. attorney offices and tribes that despite the changes in Justice Department policy announced last year, federal prosecutors still have the authority to prosecute marijuana felonies on tribal lands.

In many cases, federal prosecutors are the only ones permitted by law to prosecute marijuana felonies on tribal lands.

Walsh said that the new memorandum, like the one issued for states last year, emphasizes that states or reservations must have “robust and effective regulatory systems in place” and that federal prosecutors reserve the right to take broader enforcement actions.

The policy is likely to be criticized in states opposed to marijuana sales, particularly those with Native American reservations.

Kevin A. Sabet, an opponent of marijuana legalization and former advisor on drug issues to President Obama, called the policy an “extremely troubling development.”

“It once again sends a message that we really don’t care about federal drug laws,” he said.

Sabet, director of the Drug Policy Institute at the University of Florida, said, “Native Americans and their families suffer disproportionately from addiction compared to other groups. The last thing they want is another commercialized industry that targets them for greater use.”